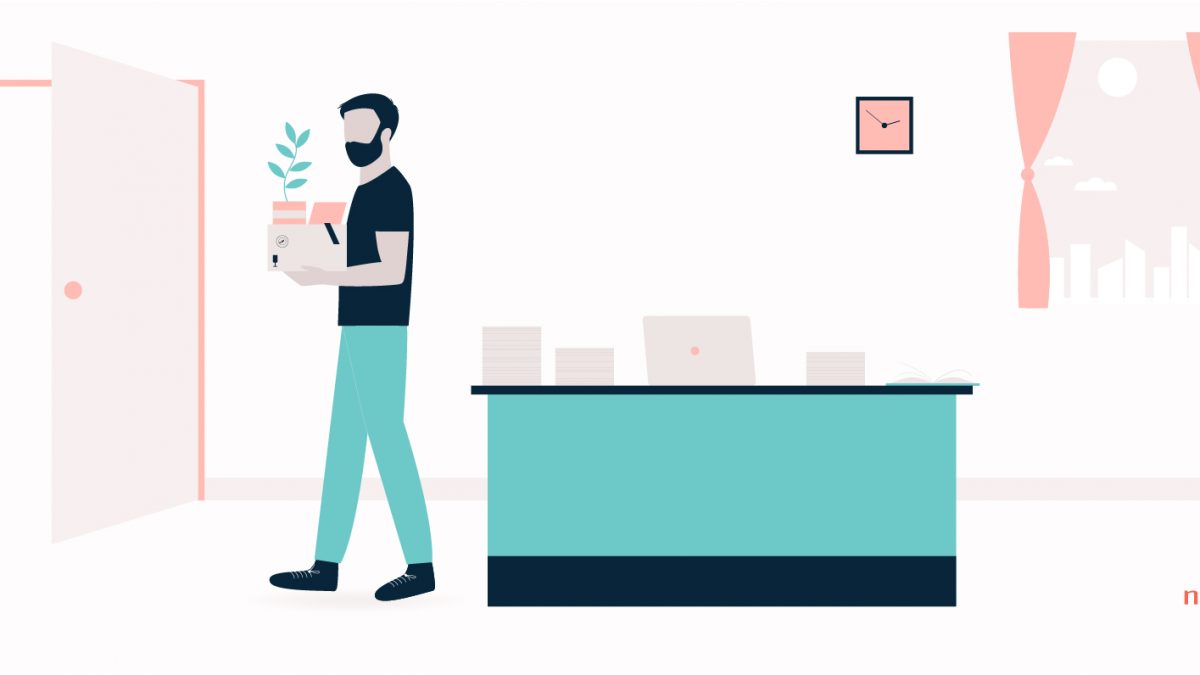 There is a concept called the J curve effect that explains why revolutionary changes usually fail. What’s more, this approach ultimately defines the success threshold of our transformation initiative.

The need for change emerges when there is no longer satisfaction with the current status quo. Demand exceeds your team’s capability, the work is constantly delayed, your delivery workflow is unpredictable, your ability to deliver results is called into question.

Something has to change quickly before your team falls into a full-fledged burnout and you lose your credibility. At this stage, usually a newly involved change agent will build a comprehensive plan, which overhauls the roles within the team, your existing process and the tools you used to work with. The plan is supposed to improve your delivery times and the predictability of your delivery system.

Revolutionary change is a significant initiative. At the beginning, you will inevitably observe how your team capabilities take a deep and lengthy dip as a result. The more disruptive the change is, the longer it takes for it to settle.

During this time the team performance gets even worse. The management becomes very uncomfortable with the situation. We all know the drill: “that plan was supposed to bring us back on track, not the other way around”. The pain is so deep and it lasts for so long that there is no tolerance and patience left anymore. This is the time that the change agent typically gets fired.

What is the J Curve Effect?

Traditional change is usually expressed as an A to B process. We start with the current process, define the desired future state and then introduce a transformation. Organizations love transformations.

The problem with this approach is that it is effectively a waterfall approach to change. This approach designs a future outcome in advance based on what we know today, it’s not a knowledge discovery process .

When we introduce change, our productivity will go down for a while as the team absorbs the change. There is a safety net that dictates how much productivity we can afford to lose. There is also a level of patience and torelance, expressing how long it takes for us to recover. Eventually, we will improve and achieve our new desired status quo. 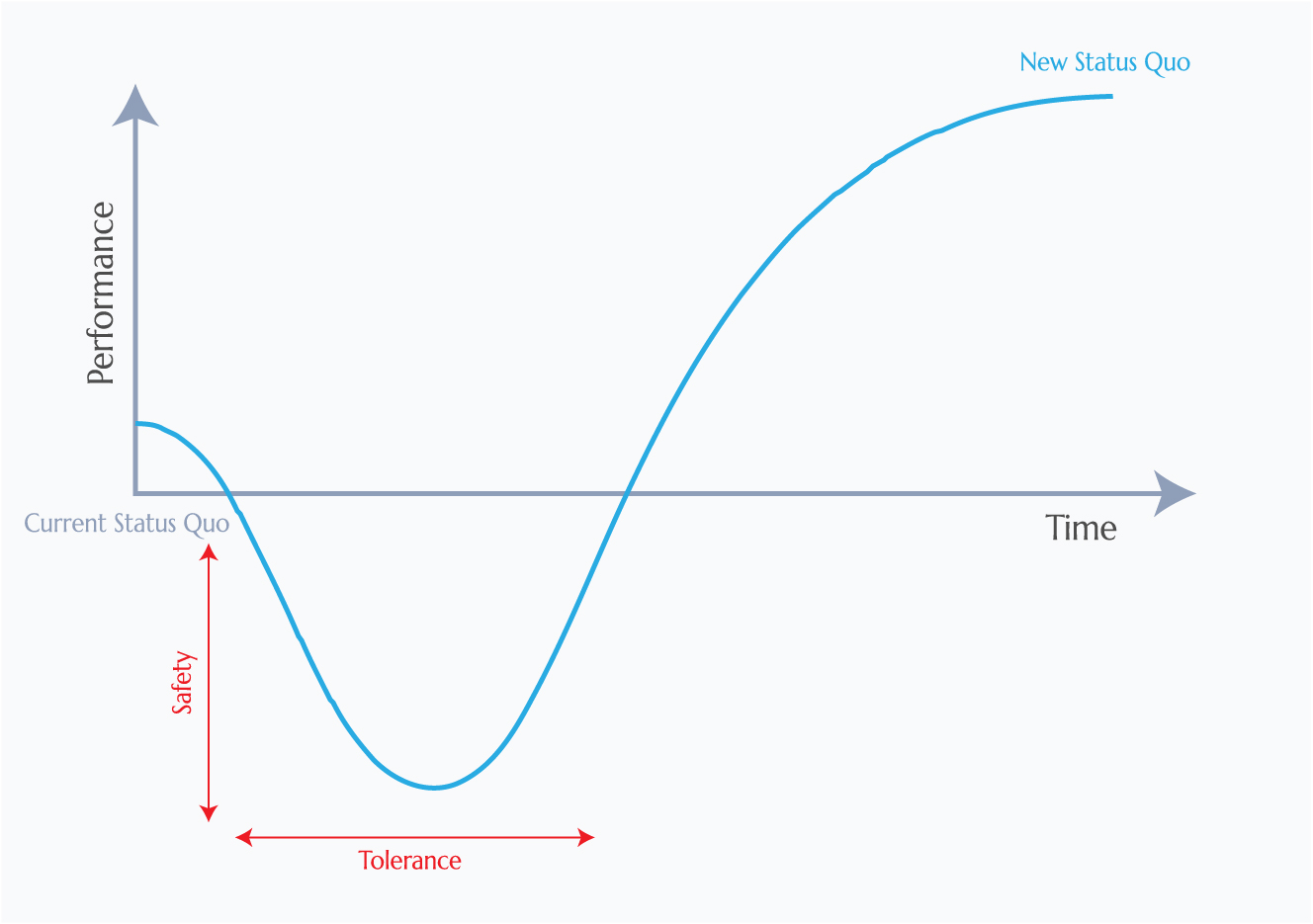 This is what we call the J curve effect. While we go through a transformation, our performance takes the shape of a J over time.

During the dip of the J, you’re left to deal with the brunt of the complaints. You’ll have to explain why things are getting even worse. Now, there was goodwill to solve the problem but the change initiative has failed. Yet another change agent will be hired to plan a new revolutionary change. That vicious circle repeats itself, up until the concept of evolutionary change arises.

The Realm of Evolutionary Change

Large changes are less likely to succeed. You’re going to hit resistance. To use a metaphor, revolutionary change tries to blow up the rocks in order to go through them, whereas evolutionary change goes around the rocks. Instead of a systematic redesign, what you need is a mechanism that suggests improvements across your existing roles, processes and tools. The goal is to enable continuous improvement with small evolutionary steps.

The first change management principle of the Kanban Method is “Start with what you do now”. It doesn’t matter where you are now, there shouldn’t be any judgment of your current situation. Own it, understand it and learn from it.

Embrace your current process – not what you say it should be, but what it actually is. Once you understand what you are actually doing, only then can you improve it. Respect existing roles, responsibilities and job titles. Don’t change them. Instead, design small evolutionary experiments and measure the impact.

With evolutionary change, we start with our initial process, evaluate whether it is delivering what we want it to deliver and then we start experimenting. If an experiment proves to be successful, we make it a standard, we move one step further and we evaluate the new state of our process. 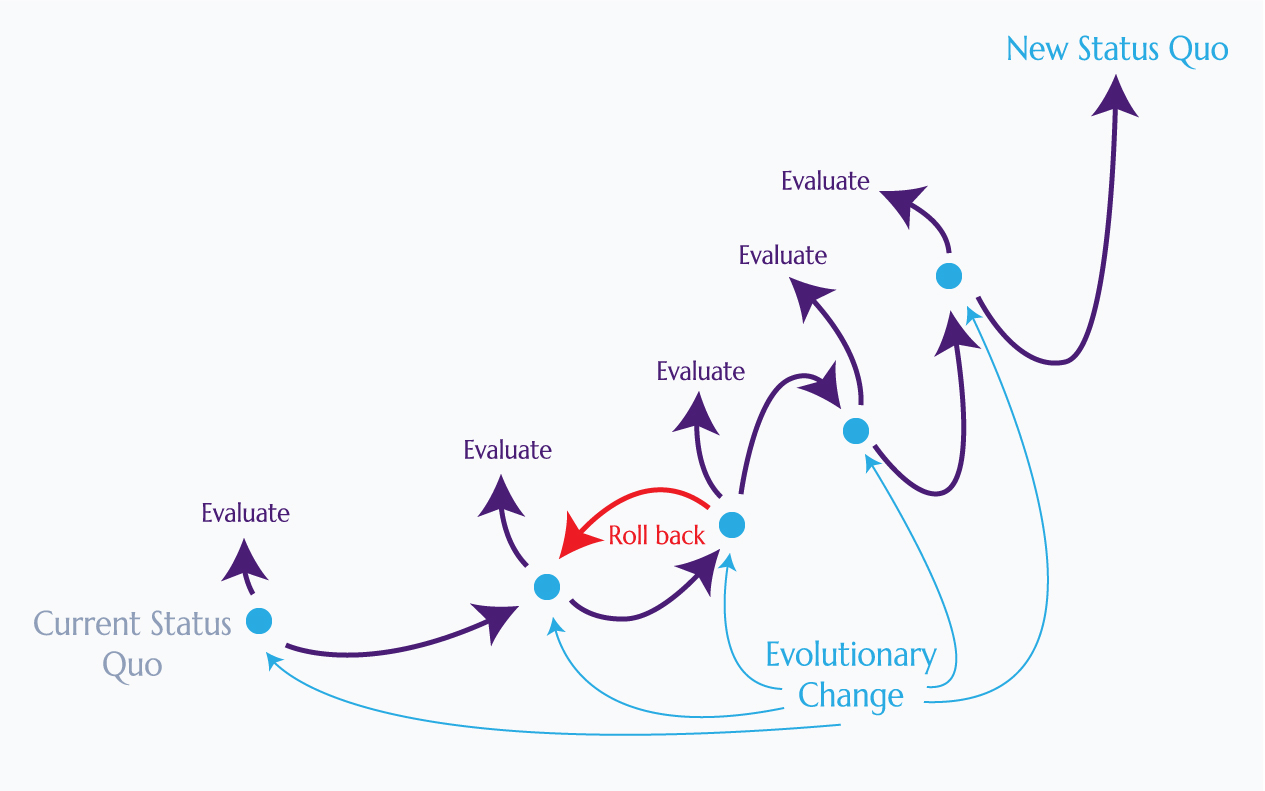 This is a continuous process. The approach encourages smaller “safe to fail” initiatives, which (based on my experience) have a profound impact not only in terms of predictability, but also on the overall business outcomes.

Eventually, we roll back certain experiments if they prove that they don’t provide the results we expect.

This is an evolutionary approach that leads us to our new desired status quo.

If you’re interested in learning all about the principles and practices to introduce evolutionary change while optimizing your delivery workflows for predictability, I’d be thrilled to welcome you to our Sustainable predictability program.

With evolutionary change, you’ll still observe the J curve effect. Your team performance will dip as well, but each dip will be much smaller and much more tolerable than it would have been with big disruptive changes. 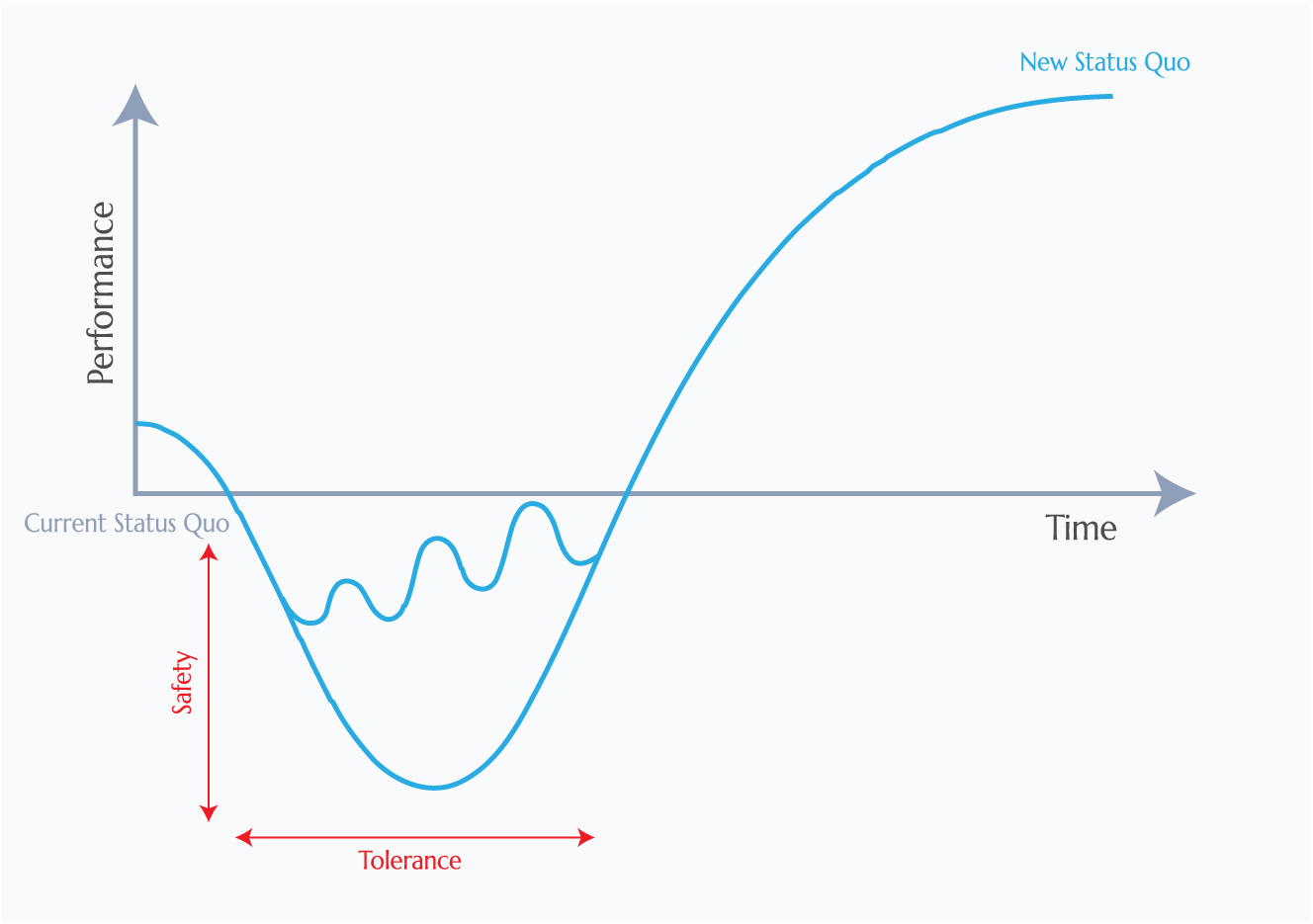 Evolutionary change increases the likelihood of a successful initiative since every small adjustment is easy to revert back. If the initiative is successful, you can make it a standard. If it’s not – you roll it back, analyze the reasons behind the failure and move on with an alternative.

The J curve effect is inevitable. However, it’s up to you to evaluate what level of tolerance is the point that defines the success of your initiative. The benefits are substantial – evolutionary change ultimately enables low-cost, low-risk experiments and it is likely to provide a massive reward.

The Management Paradox: When It's Time to Stop Managing People

A Big Thank You from Nave!

Kanban Metrics: What to Measure and Why

5 Kanban Myths You Should Stop Believing