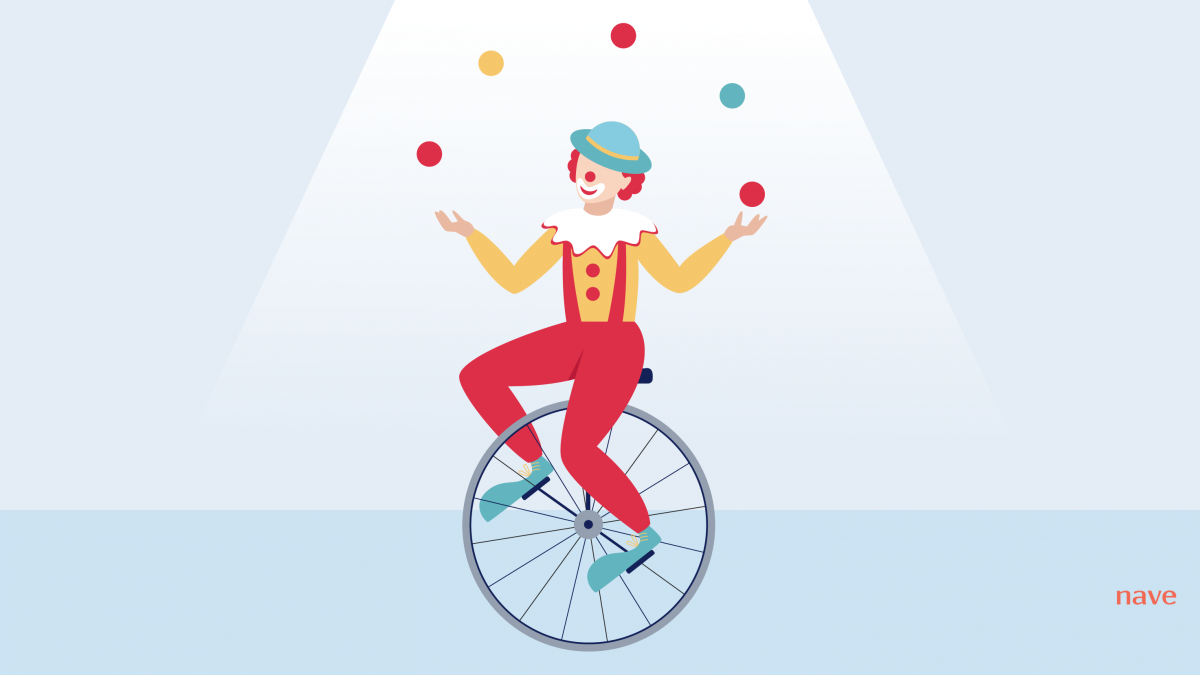 Multitasking in project management can be disruptive in so many ways. From losing focus to incurring switching costs, delaying work, all the way down to hindering the predictability of your workflow.

Even though it sounds counterintuitive, multitasking can also be the best course of action to preserve that exact same predictability.

Over and over again, I prove to myself that things are never black and white. A strategy that is widely considered successful, could prove to be a complete disaster in a certain business context.

The other way around is also valid. Something that is deemed as a bad practice, in general, can actually be the only sensible solution going forward.

In any situation, the most important thing is that you’re making an informed decision. There are no best practices in this business, there are only practices that work in your own context. So, do you have the means at your disposal to make the right choice?

Today, I’d like to tell you a story about how we handled a particularly tricky scenario and my hope is to give you an alternative perspective of whether multitasking is a good or a bad thing when it comes to project management.

“Hey, John! Something Popped Up, Can You Take Care of It?”

Our Easter campaign is one of the most exciting times of the year here at Nave. This is a project that is taking place from the beginning of January and it usually lasts about 3 months.

There are a lot of moving parts that need to fit nicely together to ensure our initiative is heading in the right direction. So, effective project planning is essential. After all, we work upon fixed delivery date.

Apart from meeting the deadline, sustaining the predictability of our delivery system is as much important for our success.

So, here we are in our daily meeting, looking into the work items that are not moving forward in the process to make sure we resolve any obstacles along the way and stay on schedule.

Our standups usually take anything from 3 to 8 min, and the goal of these calls is to navigate the flow of work so that we deliver results quickly and efficiently.

We always run the daily in front of our Aging Chart and the topic of the day is the blocked item sitting on the top of the “Development” state. Here is what it looks like today. 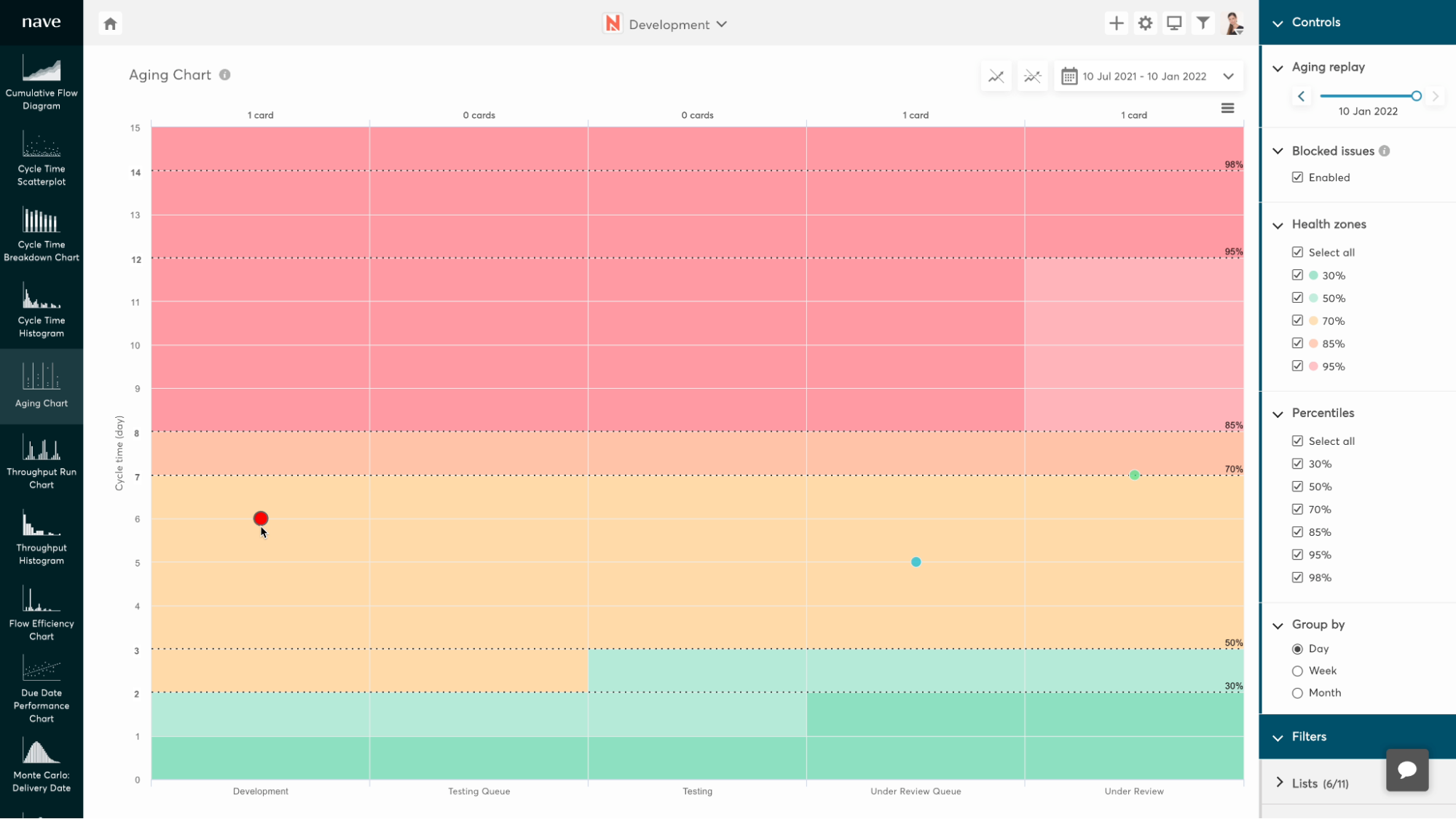 The conversation focuses upon the root cause of the problem. The developer who blocked the item, John, was also the one who initially built the code for the green item that’s currently “Under Review”.

So what happens is, our business analyst, Kate, discovered a problem with the user experience in the green card, which needed John’s attention.

In response, John suspended the current item under “Development”, marked it as blocked with a reason “Priority request” and jumped on the Under Review state to solve the UX issue.

The intention was to enable the green card to go out of the workflow as soon as possible since it is already crossing the 70th percentile. Our strategic goal is to deliver any type of work within 8 days in 85% of the cases. So, we always pay special attention to anything that’s going into the orange zone on the chart.

Now, this was the best course of action in this scenario. With that being said, it could easily be the wrong course of action. In fact, if not analyzed carefully, this approach has the potential to significantly hinder your predictability.

What could possibly go wrong?

There are plenty of scenarios that may go wrong, especially if you’re not intentional when analyzing the situation.

Can You Afford Multitasking?

Here is the thing. By suspending the current item and moving back to his previous task, John switched the context. He interrupted the flow of work and started multitasking.

Multitasking in project management has so many disadvantages. Did you know that it decreases your productivity by as much as 40%?

Every time you switch the context, you hinder your performance. Trying to process multiple tasks simultaneously results in switching costs. This is due to the friction that happens when your brain tries to shift focus from one subject to another.

Let’s say that you lose 15 min every time you have to interrupt your work. And let’s say that each team member averages 10 interruptions a week. Now, let’s do the math together for a team of 6 people:

I’d like you to take a moment to think about what you could do with $2,400 per week if you didn’t have to pay for interruptions? What additional opportunities could an extra 30 hours per week unlock?

There is no such thing as productive multitasking in project management, the most productive way of getting things done is to focus on one thing at a time!

You should always strive to finish what you are currently doing before moving on to the next task.

Is This Really the Best Course of Action?

Moving back to our initial scenario, John decided to suspend his work and incur the cost of multitasking.

And there were more consequences following his decision.

What was the impact on the work that has been interrupted? That work was artificially delayed. And we already know that the age of the work is one of the most important metrics to pay attention to when it comes to building predictable workflows.

Essentially, when he decided to stop working on his current work item and move to the “Under Review” column to fix the problem, he introduced an internal blocker in the system and artificially increased the WIP age of the item under “Development”.

And letting work age in your process is the fastest way to impede your predictability.

Sometimes, in Project Management, Short Term Disadvantages Are Worth It in the Long Run

At this point you might be wondering, “Alright Sonya, then how was John’s decision the right one?”. I’m glad you asked!

John performed a very quick analysis before making it.

First, he asked the team whether there was someone else available to take care of the green work item. If there was, then they could have handled the issue and John wouldn’t have to interrupt his work.

Unfortunately, the rest of the team was busy evaluating another important business opportunity and they didn’t have the capability to help.

Now, there were two items he had to deal with and there is just one of him. John could only give his attention to one thing at a time and he had to decide which one has the higher priority.

The next thing that John did was to evaluate the urgency and the age of both work items. They had the same class of service which meant that they should be processed in the order they have been started.

The item which spent the most time in the process is the one that he should handle first. 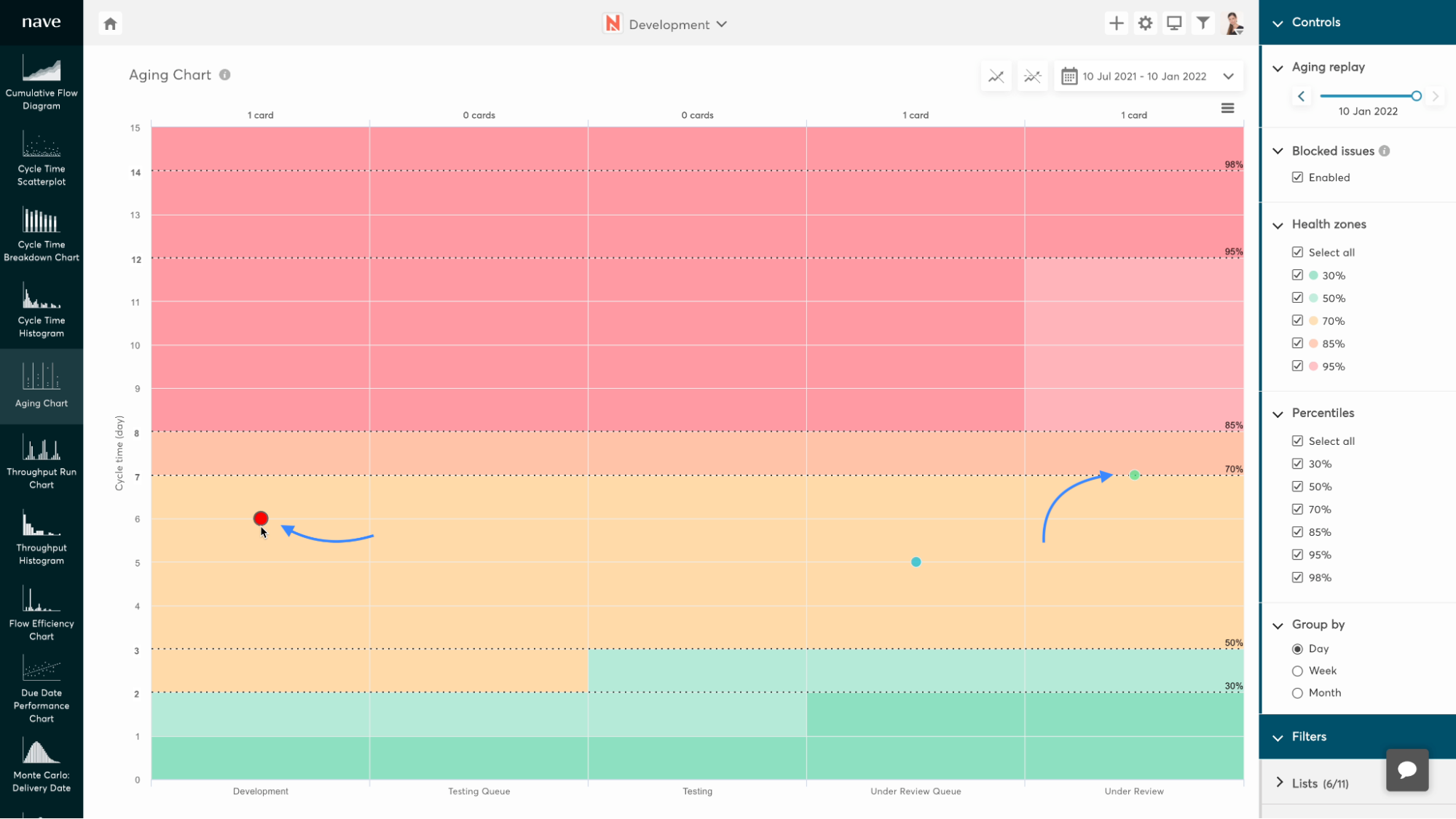 So, he quickly analyzed the Aging Chart. The green task had a WIP age of 7 days, the one he was currently working on stayed in the process for 6 days. So, he blocked the current one and moved to the green one to enable the flow of work again.

What if his current item had a WIP age of 8 days? Well, then he would have finished that task first, before moving on to resolving the other issue.

This simple analysis helped John make the right decision and, even though he had to start multitasking and let a work item age in the process artificially, in this specific situation this was the best course of action to take, as it preserved the predictability of our workflow. The short-term disadvantages were worth it in the long run.

It is easy to fall into the trap of multitasking just because something pops up out of nowhere. Always be conscious of the choices you make and how they affect the rest of your work.

At the end of the day, the goal is to make an objective decision. And it’s not that John had to figure this out on his own. All these scenarios have been described as explicit process policies.

The policies dictate what needs to happen at any one time, including the scenario, “There are two items in progress I have to work on. Should I suspend what I’m currently doing or should I finish what I’ve started first?”.

Now, it’s time for action! The next time you choose to stop the work on something and move your team’s focus onto something else, analyze your Aging Chart to decide whether this is the right choice. Let your team follow the process policies and if you don’t have any that cover your current scenario, create them!

In order for your team to become more self-managed and autonomous, they need to have guidance about what they should do in every situation.

Multitasking in project management is a bad thing, in general. However, it can also be a good thing in a certain situation. Remember, nothing is ever black and white.

Make informed and objective choices. If you have to interrupt the work and you know you’re making the right decision, then go for it. You are in a great place!

If you follow this simple strategy, you will be able to execute your work in the most productive manner. Most importantly of all, you’ll be building a system that continuously improves and self-optimizes for predictability.

And if you’re not completely delighted with the performance of your delivery workflow and you’re striving to grow efficient self-managed teams, I’d be thrilled to welcome you to our Sustainable Predictability program.

Team Commitment in Kanban: How to Set Achievable Goals without Trimming Down Your User Stories

Why Managing Multiple Projects on the Same Kanban Board Is Crucial (+ How to Make the Most of It!)