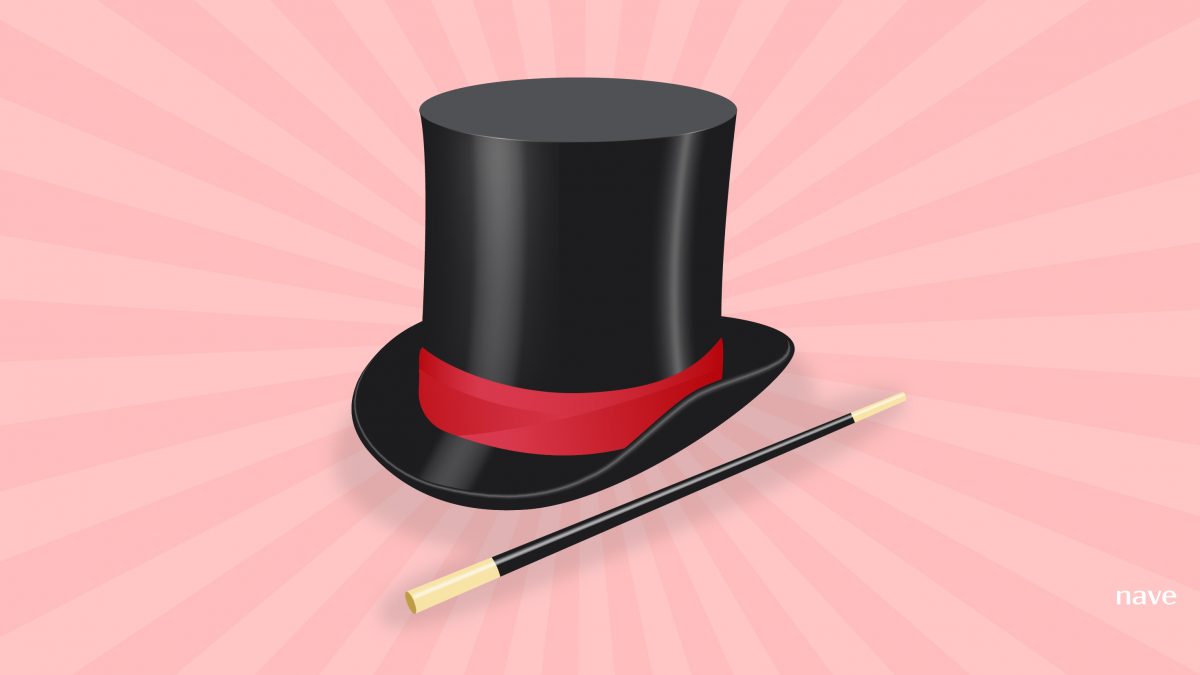 It’s astonishing to see in practice how a simple pull strategy can improve the predictability of your delivery system so significantly, even after just a couple of months.

The Wizards are a development team, working for a start-up digital signage company, which delivers the first streaming service for public displays. Developing a cutting-edge digital signage solution that aims to disrupt the status quo is a big deal, especially if you’re just starting out with your entrepreneurial initiative.

The problem with the current value propositions on the market is that they don’t provide the possibility to present real-time content. The Wizards’ company recognized this opportunity and they were very well positioned to make a huge impact in the digital signage industry.

The Wizards are a cross-functional Scrum team consisting of 10 people, delivering batches of work every 14 days to their stakeholders. The stakeholders review the deliverables and provide feedback to adjust the course of action accordingly. The Wizards were proficient in implementing the Scrum framework and they were widely considered successful because they delivered a consistent velocity on a sprint-to-sprint basis.

However, from a flow perspective, there were inefficiencies in the Wizards’ development process. The fact that their delivery workflow didn’t operate effectively hindered both their delivery times and their predictability and the Scrum velocity metric would not have exposed this.

The stakeholders wanted to have high confidence that the team would be able to achieve their goals. And it was a matter of applying a simple pull strategy that led to a tremendous improvement in their predictability, all in just 2 months.

Analyzing the Predictability of the Wizards’ Delivery System

One of the most suitable approaches to demonstrating the predictability of a delivery system is using the Cycle Time Scatterplot. 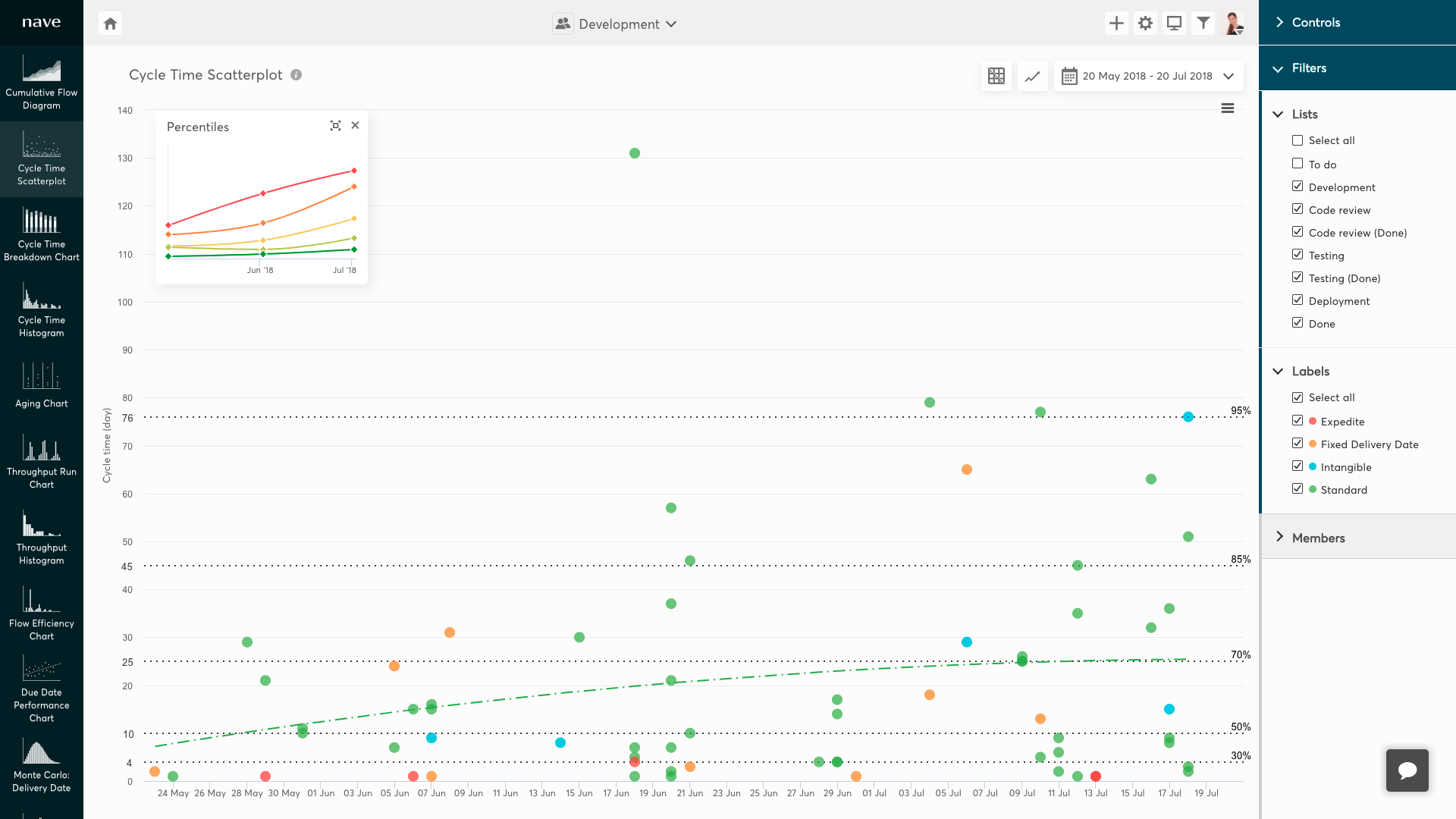 The dotted horizontal lines stretching across the graph are called percentile lines. They represent the time taken for past work to be completed. In the Wizard’s diagram, the 50th percentile points to 10 days. This means that half of the work has been completed in less than 10 days. The other half though has taken up to 130 days to be finished. In 95% of the cases, the team needed up to 76 days to deliver the work they had started.

If you’re running 14-day sprints, these numbers are quite bad. If in 50% of the cases the work was finished within 10 days, this means that stories that started at the beginning of a sprint only had about a 50% chance of being completed within that same sprint. This is not a predictable system.

If you look closer at the values that come with each percentile, you’ll notice that there is a significant gap between them:

The closer the cycle times on your percentiles are, the more predictable your system is. So, the main goal of the Wizards was to reduce these gaps.

Looking into their Scatterplot, the team started to dig deeper into the root cause behind their long delivery times. It turned out that they were pulling the smaller, quicker work items first, while the bigger, more complex items artificially aged within the process. There was no pull strategy in place that would have enabled them to prevent that behavior.

The team decided to introduce a pull policy that dictates the order in which work items in progress should move through the workflow so that their stories don’t age indefinitely. The focus switched to analyzing the age of each item in progress and progressing with those with the highest age first.

The Aging Chart came in handy for that purpose. 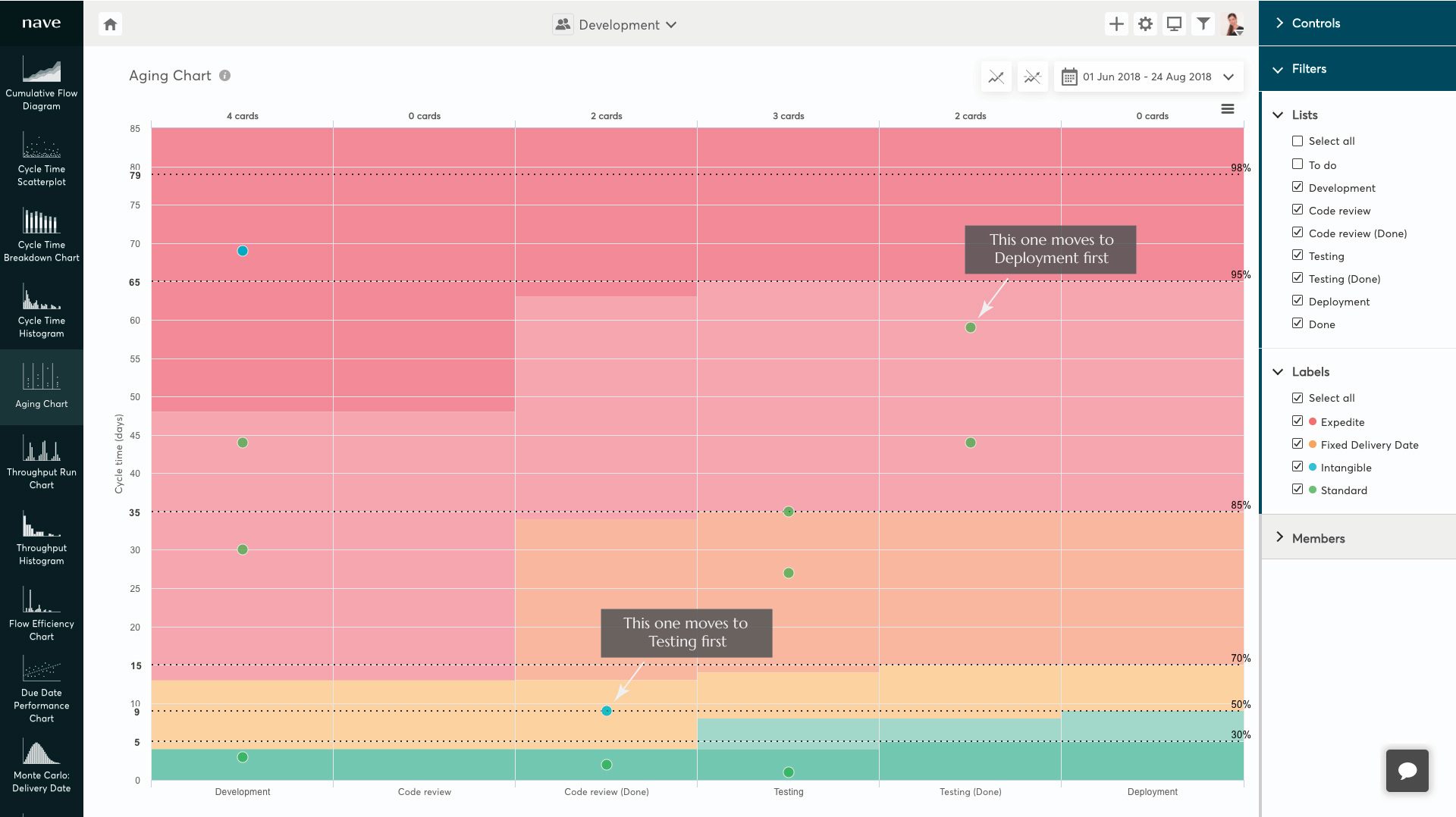 The dots on the top move forward first. By following up with the items with the highest WIP age first, the Wizards can ensure that there is no abandoned or delayed work left in the process. Sometimes, this would mean that the items that were started later had to wait until the older items were completed first, but this is perfectly fine from a predictability perspective.

The team used this pull strategy to give priority to the items that spent the most time in their workflow in order to improve their predictability.

The results? After two months, their Cycle Time Scatterplot looked like this: 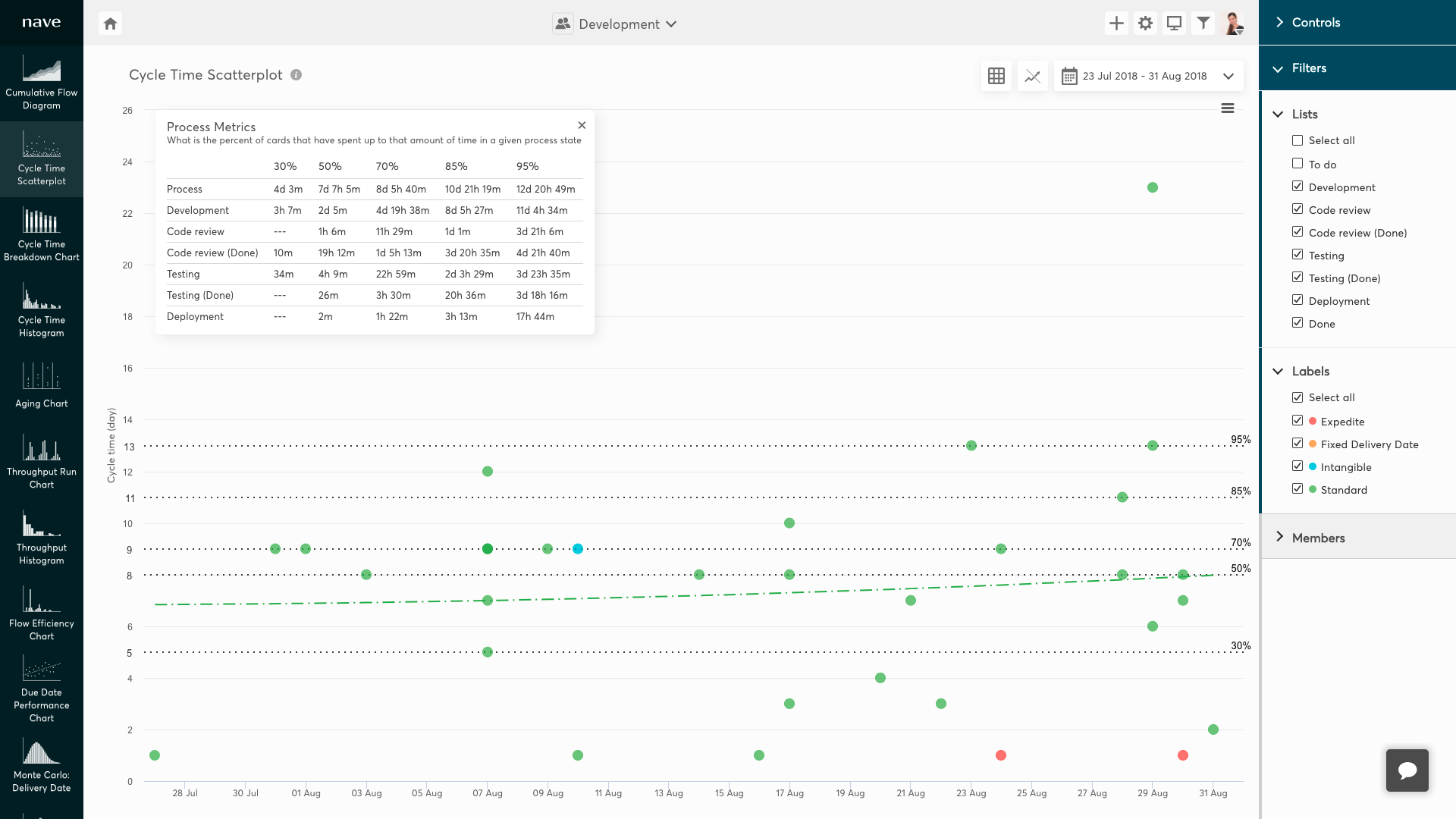 The team was able to get 95% of their stories completed in 13 days or less. Their delivery times at the 95th percentile were reduced by over 80%. This is what their cycle times looked like:

Can you see that the gap between the 85th percentile and the 95th percentile is only 2 days? This means that now the Wizards can deliver any item in 13 days or less and there is a 95% chance that they will meet that commitment. The predictability of their system, first and foremost, was dependent on how effectively they were managing the flow of work.

If you’re interested in learning about how to build a stable predictable delivery system and meet your commitments by delivering on time, I’d be thrilled to welcome you to our Sustainable Predictability program. 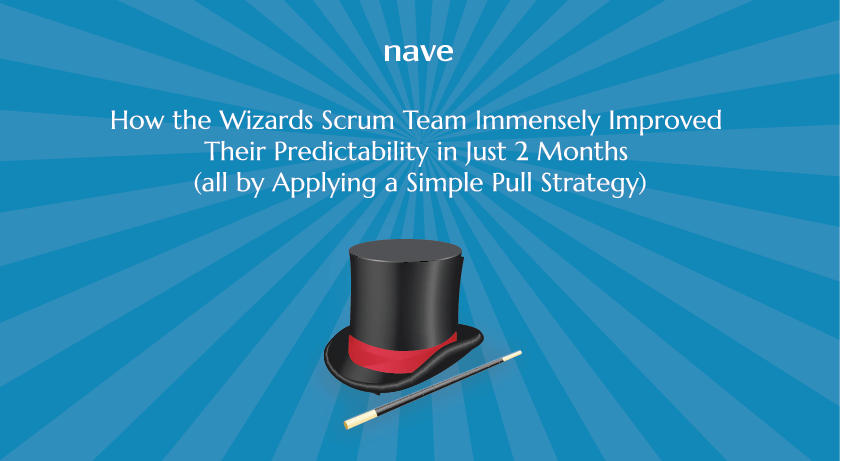 Use this PDF as a reference when assessing your explicit policies and evaluating the predictability of your delivery system.

Keep in mind that the Wizards didn’t change how much time they spent working, how many people were working in the team, or the nature of the work itself. Nothing else changed. Applying this simple pull strategy of handling the item with the highest age first resulted in a tremendous improvement in the predictability of their system.

The Wizards have exceeded their stakeholders’ expectations ever since, delivering off-the-charts solutions to their customers in a stable, predictable manner.

How helpful is this article? 6 votes
Process Improvement, Team Performance

How to Use Kanban Analytics to Streamline Your Scrum Events

Do You Perceive Your Workflow as a Knowledge Discovery Process?

How Much Data Do You Need to Make Reliable Delivery Predictions?

How to Leverage Your Kanban Analytics in 4 Steps